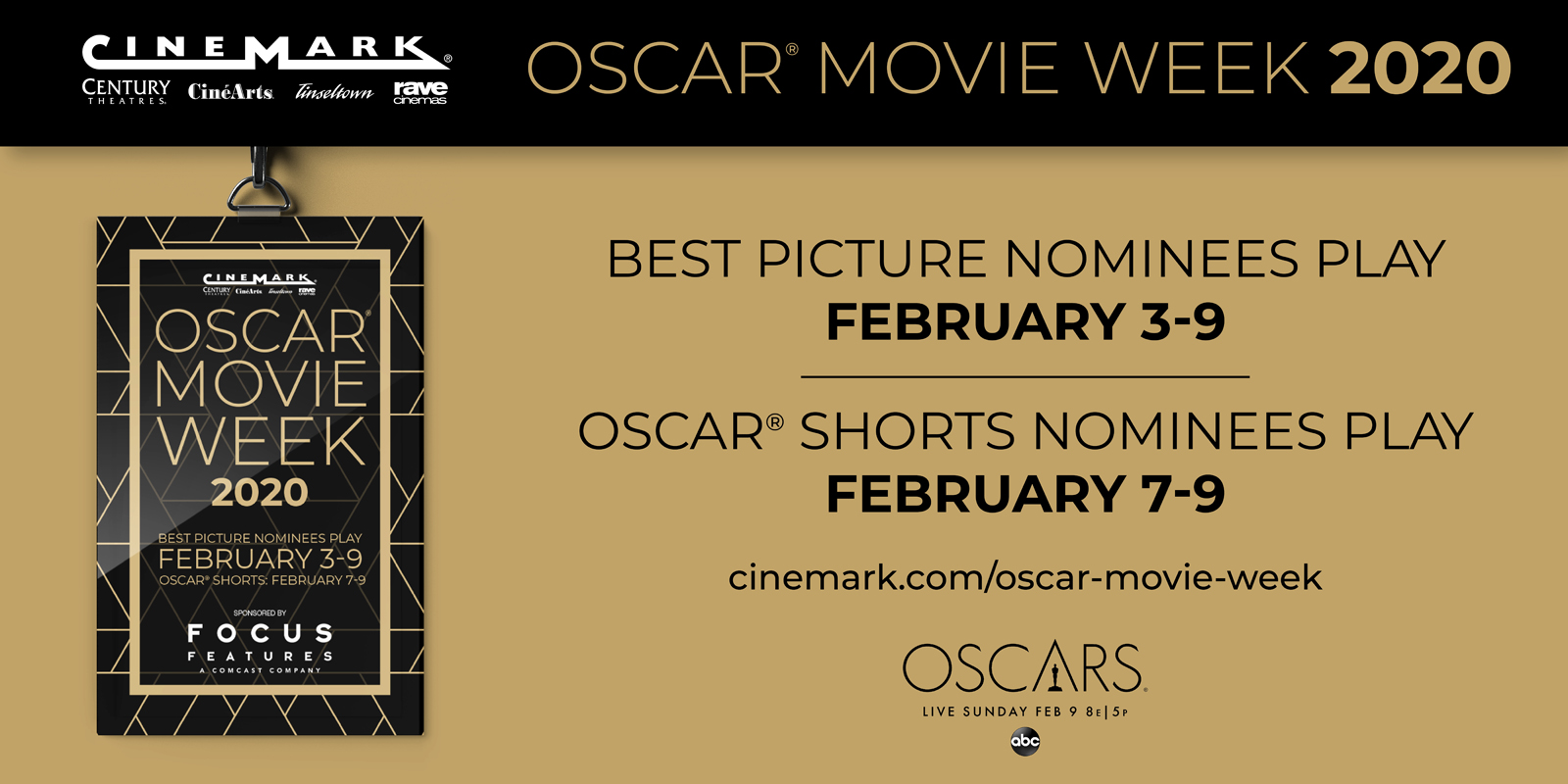 Plano, Texas (January 13, 2020) – Cinemark Holdings, Inc. (NYSE: CNK), one of the world’s largest and most innovative movie theatre companies, celebrates the 92nd Oscars with its annual Oscar Movie Week Festival. Movie fans will have the opportunity to enjoy this year’s Best Picture nominated films and the Best Live Action and Animated Shorts before the anticipated awards ceremony on Sunday, February 9. Festival passes are on sale now at www.cinemark.com/omw.

“Oscar Movie Week is one of our most popular programs of the year and Cinemark is excited to bring the festival back once again in celebration of this past year’s critically acclaimed films,” said Justin McDaniel, Cinemark SVP of Global Content Strategy and Analysis. “Movie enthusiasts will have the chance to experience some of the best movies of the year in Cinemark’s comfortable and innovative viewing environment.”

Cinemark’s Oscar Movie Week Festival will run from Monday, February 3, through Sunday, February 9. Guests can purchase a collectible festival pass, sponsored by Focus Features, for $35 to view all nominated films throughout the week at select theatre locations. Festival pass holders will also receive an exclusive offer for 50 percent off any size popcorn and a keepsake badge and lanyard. Moviegoers are also invited to view short film nominees for $10 each or nominated movies on a single-film basis at regular admission price. Find participating theatres and check show times at www.cinemark.com/omw.

Back by popular demand, moviegoers will be able to cast their vote for Best Picture for the chance to win excellent prizes such as a free trial to Movie Club, Cinemark’s monthly subscription program. Participants who correctly select the winner are automatically entered to win a grand prize provided by the American Licorice Company. Voting will open Jan. 17 and be available until Feb. 8 at www.cinemark.com/omw-vote-2020.

About Cinemark Holdings, Inc.
Headquartered in Plano, TX, Cinemark (NYSE: CNK) is one of the largest and most influential movie theatre companies in the world. Cinemark’s circuit, comprised of various brands that also include Century, Tinseltown and Rave, operates 548 theatres with 6,082 screens in 41 states domestically and 15 countries throughout South and Central America. Cinemark consistently provides an extraordinary guest experience from the initial ticket purchase to the closing credits, including Movie Club, the first U.S. exhibitor-launched subscription program; the highest Luxury Lounger recliner seat penetration among the major players; XD – the No. 1 exhibitor-brand premium large format; and expansive food and beverage options to further enhance the moviegoing experience. For more information go to https://investors.cinemark.com/.